A place steeped in history, at the same time an idyllic residential area, interspersed with lakes, parks and trees. Zehlendorf and the adjacent districts of Grunewald, Wannsee, Dahlem and Schmargendorf are among the most popular residential areas in Berlin. With 114,396 inhabitants, Zehlendorf seems to be a quiet area. But Zehlendorf not only offers recreation and tranquility, it is also a place for research and education and has an interesting past. A chain of lakes with Krummer Lanke and Schlachtensee runs through the whole of Zehlendorf – thanks to the good subway and S-Bahn connections, many Berliners make a pilgrimage here in the summer for a walk and a swim.

In 1945, the victorious Allied powers decided to assign Zehlendorf to the Americans. After the Soviet troops had occupied Berlin, the Americans settled in Zehlendorf and set up their headquarters on today’s Clayallee. Barracks and officers’ buildings still characterise the area around Clayallee today. Named after the hero of the Airlift, military governor Lucius Clay, the street is one of the longest in the district and runs from Roseneck through Schmargendorf and Grunewald via Dahlem to Zehlendorf, ending in Teltower Damm, a popular shopping street for all Zehlendorf residents. The side streets of Clayallee offer housing options for every taste, from rented flats to terraced houses to stately villas.

Zehlendorf is also far ahead culturally: the Allied Museum recalls Zehlendorf’s eventful history. The museum shows what role the Western Allies played in Germany and how they helped Berlin to freedom. There is also the Dahlem Museum, one of the large museum sites of the National Museums in Berlin. The Brücke Museum, with 400 paintings and sculptures, as well as drawings, watercolours and prints, is dedicated to the expressionist Brücke artists’ group. Today it is a listed building.

Zehlendorf is especially popular with families with children. They don’t have to look far to find a good and sophisticated school for their offspring. Popular with expats: the John F Kennedy School, as it still bears witness to German-American friendship and classes are held in English.

To the west of Zehlendorf proper is the villa district of Grunewald with truly stately industrialist residences, named after the neighbouring forest with an area of around 3000 hectares. To the southwest is Dahlem, also characterised by prestigious single-family homes and smaller parks. The Free University of Berlin is located here with several institutes. Around 33,000 students come here from all over the city.

Wannsee has been known throughout Germany at least since Conny Froboess’ hit from the fifties. Wannsee and Unterhavel are popular regatta areas for sailors and rowers, and the lido also attracts thousands of visitors every day in summer. But Wannsee embodies not only leisure and summer fun and living in green surroundings with high recreational value – the darkest chapter of German history is also associated with Wannsee: On the western shore lies the House of the Wannsee Conference, where in 1942 the National Socialists sealed the deportation and murder of European Jews. Today, the villa is a memorial and educational site. In the same street is the Liebermann Villa, once the summer home of the painter Max Liebermann, today it is an art museum with a listed garden.

Our expert for Berlin-Zehlendorf is Inga Rück.

Inga Rück: “Overall, Zehlendorf offers a very attractive residential location, especially for families who appreciate the distance to the city. You live in the countryside and yet you can be in the city in 15 minutes from Dahlem, Grunewald or Zehlendorf.

The transport links are also very good, with the S-Bahn and U-Bahn providing optimal connections. There are also many schools in the area, both private and state, as well as international schools. From primary schools to grammar schools to the Free University of Berlin. The Dahlem district in particular is extremely popular with families, both nationally and internationally. There are many residences of ambassadors who live here with their families because they appreciate the location.

However, prices have also risen sharply in southwest Berlin.  In addition to the rising price of land, there are beautiful historic buildings here, some of which are listed and have to be renovated and restored accordingly, which is also very cost-intensive. So in conclusion, Zehlendorf is a very desirable residential area, but it is also correspondingly exclusive and highly priced.”

Inga Rück is also our expert for luxury real estate. Her portfolio includes exclusive maisonettes, loft flats, lofts and luxury villas in attractive locations. In order to meet the desire for a discreet, efficient and transparent service in dealing with high-end properties, they are not offered online upon request. 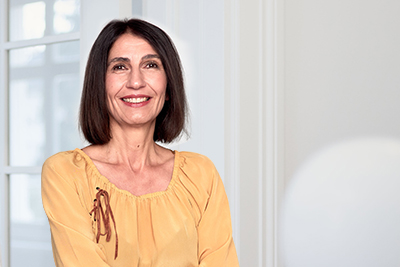