Changing dynamics of the capital

Berlin, 18.06.2019 – Historically Berlin has been lagging behind the six largest metropolises in Germany with higher unemployment, slower economic output and hence lower purchasing power index. Over the recent years, this dynamic has somewhat changed and the gap has been closing as unemployment is now steady below 10% for several years and Berlin has somewhat transformed into a service based economy (85% of output comes from services). While GDP growth is slowing for Germany in general, Berlin has outperformed the national average for the past several years, posting 3.1% in 2017.

Berlin’s population is on a steady increase since 2004 with over 50.000 people coming to the city each year looking for employment. In 2017, Treptow-Köpenick recorded the highest percentage of population growth in Berlin and while some areas, such as Friedrichshain-Kreuzberg can be considered overpopulated (with the highest population density) there is notable growth continuing today. Despite high density, there is still plenty of potential in properties that have not yet been developed or are underused.
The district of Berlin-Mitte illustrates how closely population development and new construction are linked, recording both the most extensive residential construction and the highest absolute population growth.

While the upward trend in rent levels is somewhat slowing down, Berlin is still posting double-digit price growth rates for condominiums and apartment buildings.

The asking prices for condominiums in Berlin have risen by 12 per cent compared to the previous year. The median asking price recorded in the first to third quarters of 2018 was €4,150 per square metre. When price increases were almost all double-digit, as in previous years, demand exceeded the available supply of apartments for sale, which drove prices up. This is firstly due to the narrow rental market. Secondly, the still very low level of interest rates often mean that monthly credit instalments are below the level of rent for comparable apartments, even at high purchase prices. Thirdly, there are long-term motives for both domestic and foreign purchasers of condominiums, such as wealth accumulation and retirement provision.

The vacancy rate in Berlin today is merely 1.1%.

As in previous years, the largest number of offers for condominiums was concentrated in the city centre or areas close to the city centre. Over 50 per cent of the advertisements were recorded for the four central districts of Charlottenburg-Wilmersdorf, Mitte, Pankow (including Prenzlauer Berg) and Friedrichshain-Kreuzberg. 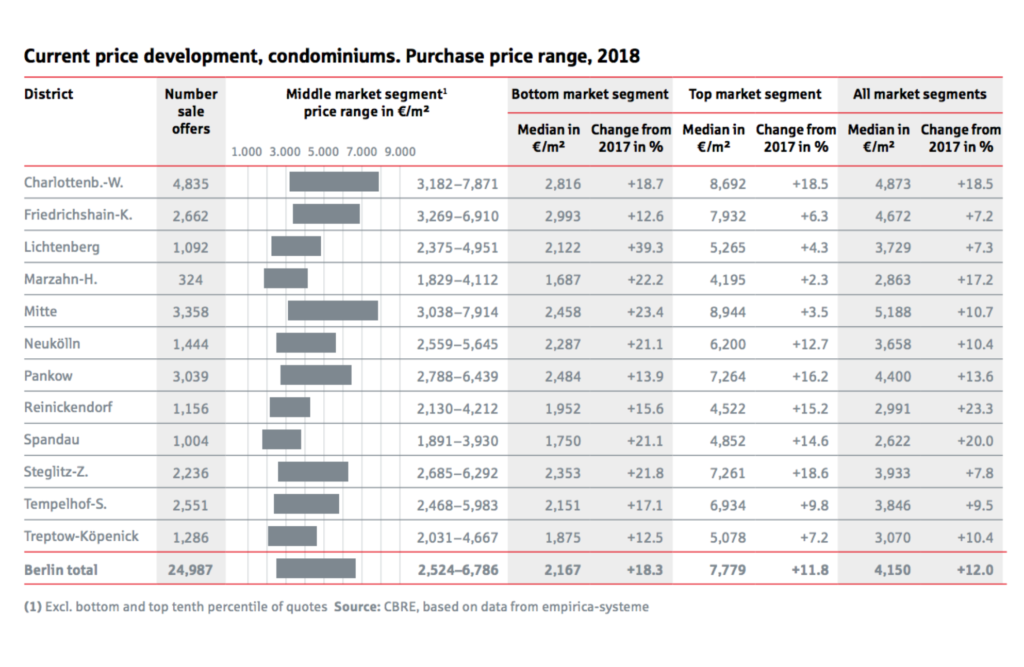 Urbanity and centrality continue to be the most important rent-influencing factors. At €12.99 per square metre (plus 9.9 per cent), the dynamics were particularly strong in Friedrichshain-Kreuzberg; this district recorded the highest increase in Berlin in absolute and in percentage terms.

The number of advertised offers to buy apartment buildings in Berlin has declined steadily in recent years. As in the market for condominiums, demand clearly exceeds supply. In view of the unbroken upward trend in rent and price levels and the lack of investment alternatives, many owners see no reason to sell. The volume of portfolio transactions reached around €4.6 billion in 2017, well above the previous year’s level. There were signs of a supply shortage in the first three quarters of 2018. Berlin’s overall share in the nationwide transaction volume was only around 19%. In individual transactions, according to the Gutachterausschuss expert committee, more than 1,000 purely residential or residential/commercial buildings are still being sold each year. The market is therefore still fluid, but it is becoming more difficult to generate significant purchasing volumes.

The share of rental apartments in new construction volume is continuing to rise. Numerous districts are registering a significant increase in the new construction pipeline. Currently, marketing is focusing on the rental apartment segment, with around 60% of the new units currently marked for letting. This share could even increase if – as is to be expected – some of the new condominiums are acquired and leased by their buyers as investment properties.

The typical duration of a house price cycle is only five years. The prolonged ten-year cycle is therefore a striking case. Especially with respect to financial stability and potentially negative effects on the economy, the risk of a sharp setback increases with every upward spike. The following conditions would indicate that upward trend cycle is nearing it’s end:

According to DB research, the four above-mentioned conditions are unlikely to materialise in 2019

Therefore, the price cycle is expected to remain in place. As in the past ten years, prices look set to rise at a faster pace than rents. Whilst this would put further downward pressure on initial rental returns, property market assets ought to be more attractive than capital market investments – for both private and institutional investors. This constellation argues against a near-term end of the cycle, as property market yields look set to clearly outperform long-dated German government bonds in the years ahead.

Moreover, many real-estate assets are also more attractive than the highly volatile prices and dividends of public companies. Rental returns of around 4% per annum in Germany as a whole are hence likely to attract additional investors and, at times of crisis, real estate investments will probably be preferred over financial assets.