Berlin’s rental costs- a trip along the U2 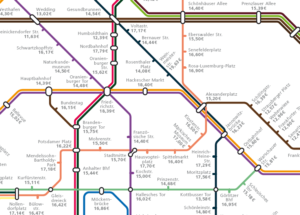 The subway map, available to download at the top of this page, shows the average rental costs per square meter near every station in central Berlin.

The U2 line, as highlighted on the map, starts at Pankow S-Bahn station and runs through from the eastern city centre (Alexanderplatz) to the western city centre (Potsdamer Platz, Wittenbergplatz, Zoologischer Garten), and finally to the Ruhleben terminal station. In total the U2 has 29 stations and a length of 20.7 kilometers. It therefore plays a central role in Berlin’s public transport system, connecting some of Berlin’s most famous historical landmarks, attractions and places. It’s locally known as the “tourist line” because of this and it’s indeed true that large groups of school children on class trips and families on their holidays can regularly be found on the route.

Living in close proximity therefore to any of the stations along the U2 line has become something of a luxury, and this is reflected in rent prices near most of its stations.

Starting at the beginning of the line in North-East Berlin. Pankow generally remains a cheaper district on average when compared to other areas in Berlin, and subsequently is the cheapest place to rent along the whole of the U2 line. Rent prices gradually increase however the nearer to Alexanderplatz one travels. While the average rent per square meter in an apartment block near Pankow station is €12.23, the average rental cost around Rosa-Luxemburg-Platz, just five stations down the line, is €16.90 per square meter.

After reaching Alexanderplatz, where rent prices take a slight dip, the U2 heads for the west. A few stations later and rent prices along the U2 line reach their peak at an average of €17.70 per square meter near the underground station ‘Hausvogteiplatz’ in the historical district ‘Berlin Mitte’. Its central location is of course something that draws many to the area as well as the fact that it lays directly next to Gendarmenmarkt- known commonly as the “most beautiful square in Berlin”. There one finds beautiful architecture including a concert house, French and German churches and a monumental statue of Germany’s renowned poet Friedrich Schiller.

Continuing the journey and the U2 crosses Potsdamer Platz into the West. Prices remain high, around 16-17 euros per square meter, until Zoologischer Garten where prices start to steadily decrease to around €14.40, reflecting the increasing distance from the city center as the U2 heads deeper into the west. On average rent per square meter remains at a steady rate until the final two stations along the line, Olympiastadion and Ruhleben, where rent decreases to €12.83 per square meter.

To sum up, buying a property along the U2 line would be a fantastic capital investment. Travelling through areas with some of the highest rental returns in Berlin, and in a market where property prices only continue to increase, now is the time to invest in the areas as mentioned above. In comparison to London or New York’s city center, central Berlin still remains cheap but this is likely to change in the coming years. Investing in Berlin would be “Ihr cleveres investment”.