Buying property in times of COVID 19 and Berlin rent cap

In our live chat, the two managing directors of Black Label Properties will answer your questions on the subject of “purchase price developments in Germany”. They provide information on current house and apartment prices, highlight developments and trends on the real estate market in 2020 and provide an overview of regional changes.

The Berlin real estate market is under pressure. What exactly did the two managing directors observe in the last 8 months? What effects does the rent cap have on the willingness to invest in Berlin? Are there new buyer groups or different seller groups? Are there winners and losers in the crisis? Is there a crisis at all? Isn’t renting much better than buying by now?

If you intend to sell or buy a property in the near future – or are generally
interested – then you shouldn’t miss our 10th Berlin Real Estate Talk. 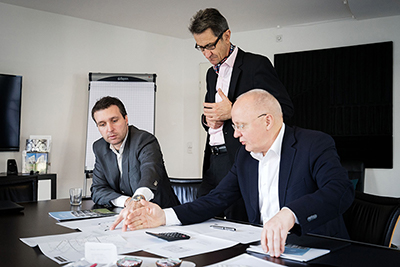 Andreas Müller is the managing director of BLP Investemts GmbH. For 30 years he has been advising and supporting buyers and sellers of real estate. He guides them from the certified market value analysis to the notarization of the purchase contract.

What did you observe on the real estate market in the last 8 months?

It was a big shock of course, especially in April and March we were quite nervous because we didn’t know what was going to happen with the pandemic and with the prices here in Germany, but we were quite lucky. The German economy actually performed much better than we had feared, what the government did to the German economy was fantastic, they’ve supported most of the local businesses.

When we’re looking on property prices here in Berlin, what we have seen is more or less caused by the rent ceiling, which already happened last year. A lot of our investors have decided not to buy in Berlin anymore, because of the rent ceiling, because they are really scared of what the local government might come up with next. However, this only applies to old buildings. The new buildings are actually going through the roof in terms of pricing. We have seen a massive price increase on the new build here in Berlin even during the corona crisis property prices are still growing, although not as much as we have seen in the last couple of years but at least the market is stable and growing.

What effects does the rent cap have on the willingness to invest in Berlin?

The rent cap is much more important for investors than the pandemic. The reasons for the investors to purchase in Berlin are safety and security. The new regulation is now basically taking away potential profits, which weren’t that high to begin, most of them are happy with 2-3% return. People are looking for safety and stability quite similar to a savings account. We have the 10-year tax advantage so if you hold the property for 10 years or longer you will not pay any income tax here in Germany that the status quo as of today, so to answer your question yes, the rent ceiling has an impact especially when we’re looking at old buildings, according to law that is everything that has been built before 2014. It does not affect the new build, however there are a lot of developers who have decided not to invest in Berlin at the moment which means, that the supply is lower, but the demand stays the same.

Isn’t renting much better than buying by now?

Generally speaking, yes, but it depends on what you’re looking for in the future. Especially in big cities where the market is stable, if you want a save investment buying a property is a pretty good choice. If you want to stay somewhere for just a short period of time of course renting is a better option. However, renting is almost always more expensive in the long run. The Germans are sometimes a bit strange when it comes to renting, because they tend to rent an apartment their entire life rather than to buy it and, in the end, they could have bought it 3-4 times with the rent they have paid. So, buying is still cheaper than renting in general terms.

How are the prices developing in the apartment market in Berlin in 2020?

Firstly, you have to differentiate between buying a property where you want to live in and buying a property as a capital investment. Like I said, with capital investments you have to differentiate between a new built and an old built because of the rent ceiling but we have seen fantastic capital investments in the last couple of years. Anything that’s a new build or funnily enough tenanted apartments. Tenanted apartments or rather apartments where the tenant is protected by the German law, which is very strict, are still very cheap today. In those cases you have to keep the tenant but in return the property is much cheaper than the same property would be if it was vacant.

Could we have a potential oversupply of apartments and under supply of larger family housing with garden space.

What most people are looking for, are nice apartments where they have enough space, a garden or a balcony and ideally in the city centre. This, of course, is very rare and you have to pay a fortune. The prices for this kind of apartment continue to go up, which is great for the people who own them but only very few people can now afford them. So that’s a big issue. What those people are doing, especially when they are living in a small apartment, is, that they either rent out or sell their apartment and move to other areas. Since it is getting more and more popular to work from home, they can live outside the city centre and commute to their job maybe twice a week. We have seen that in other big cities in the world like New York, London, Paris, Madrid, Rome and I think this trend is also happening here Berlin. A lot of our properties are not in the city centre of Berlin, which is something many of our international investors are not really looking at and I think that’s a mistake. Properties in the outskirts of Berlin or in other areas here in Germany for example in Leipzig are much cheaper and there is a higher potential of growth because there are simply more people who can afford to buy these kinds of apartments and houses.