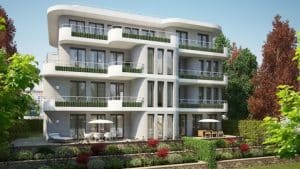 We are delighted to present Weisse Villa Westend, an exclusive development of seven art deco apartments in one of the best addresses in Berlin. Priced from 780K Euro to 2.1M Euro for the penthouse apartment with private pool and stunning views over the West end, this is a rare opportunity to own a historic property in the city’s most affluent neighbourhood. The apartments are set beside the grounds of a two-storey villa built in 1922-3 by Hans and Wassili Luckhardt and Franz Hoffman, an unusual example of Expressionism in Berlin architecture.

The villas (‘White Villas’) are south-west facing and have sharp lines, 2.70m high ceilings, floor to ceiling windows, built-in kitchens and a mix of colours and textures. There are also concierge services and a virtual gatekeeper. Conceived by architect and celebrity interior designer, Ursula Seeba-Hannan they are very much in keeping with the style of the main villa, Monument House Buchthal, a listed property which is being restored for its current owners.

Weisse Villa is located in a secluded, maple tree lined street in Berlin’s British quarter within close distance of Charlottenburg Palace and Brixplatz, one of the city’s oldest parks. It is within walking to International Club Berlin, a private members’ club that continues the legacy of the post-war British Officer’s Society complete with tennis courts, a swimming pool, bar and restaurant, and other key attractions including the 1936 Olympic Stadium and modernist Olympic Village, Messe exhibition ground, the Funkturm, Berlin’s lesser-known tower, and various concert halls, theatres and upmarket businesses.

Originally developed into a residential neighbourhood for the Berlin bourgeoisie and so named after London’s Westend (Mayfair, Fitzrovia, Soho Covent Garden), it was planned as the city’s artists’ colony, with the intention to build only traditional style villas with ample living space. For those wealthy enough to live in Westend, the villas provided a stark contrast to other areas of the city that are dominated by multiple accommodations in the same building or what we now call ‘Plattenbau’ (Brutalist concrete architecture) or apartment blocs. Unlike London’s Westend, which has been dominated by overseas investors, buy-to-let landlords and second homes, Berlin’s most affluent neighbourhood isn’t ostentatious and has retained its character, community and diversity thanks to the city’s strict planning laws.

Very close to Tegel and easy transport links to Schonefeld airport, both of which have international flights. City centre: 20 minutes by U-Bahn to Potsdamer Platz.