Solid investment with potential in top location in Berlin Charlottenburg 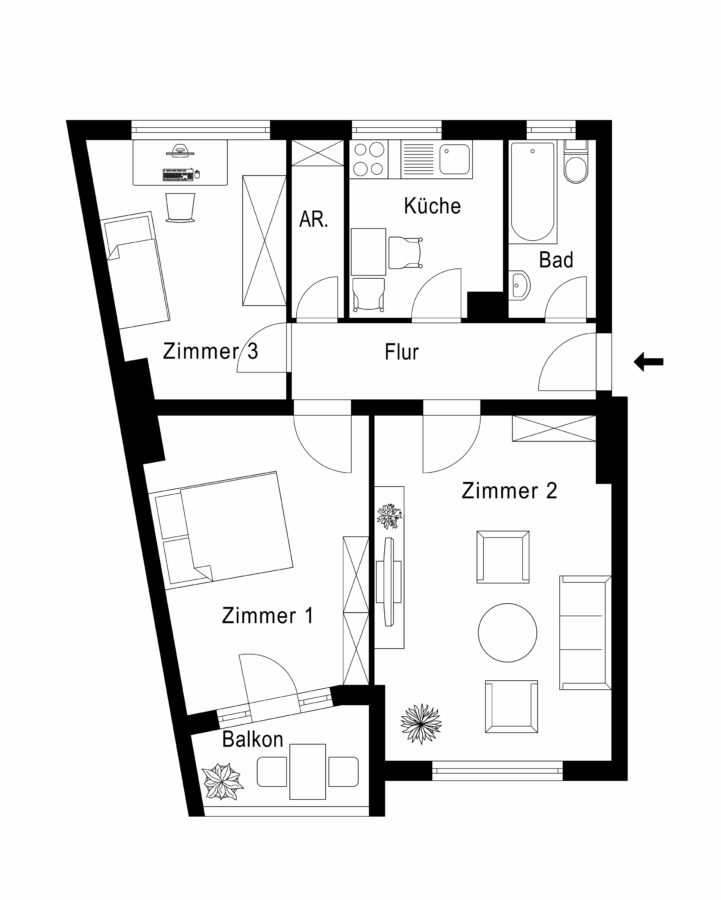 The apartment building with 20 flats was extensively renovated in 2019 and is an excellent profitable investment.

On offer here is a rented 2.5-room flat. The bright living room provides direct access to the balcony. The two other rooms can be used as bedrooms and study rooms. The kitchen offers enough space for a small dining area. The daylight bathroom is equipped with a bathtub. A separate storage room, like all the rooms in the flat, is directly accessible from the hallway.

The flat is currently rented at a net monthly rent of € 393.47. For further information about the tenancy, please contact us personally.

In order to protect the privacy of the tenants, this advertisement does not contain any current interior photos from the flat. The flat is in a state in need of renovation. The tenants enjoy a 10-year protection against termination as of the change of ownership in the land register. This flat is therefore suitable primarily as a capital investment and at a later date for owner-occupation.

Black Label’s international team can offer advice on all stages of property purchase, from the financial benefits of buying property in Germany to the step by step process of acquiring your new home or investment. Our team speaks fluent English, German, French and Mandarin, and works together with a team of English-speaking lawyers, notaries and mortgage brokers in Berlin.
We can provide you with a varied choice of properties to suit your needs. Just send us your search specifications, including:
- Property style
- Budget
- Location
- Investment or own use
For advice on financing your German property purchase, please get in touch with a member of our team. Our independent mortgage broker is able to offer up to 70% to international clients, and our recommended lawyers are at hand to explain the legal process of buying real estate in Germany.
Interested in letting your new Berlin property? Black Label offers management packages for both furnished and unfurnished lets, as well as a complete design and furnishing service tailored to your style. Get in touch with us or stop by the office for more information.

For a long time, the capital's lifestyle was shaped in Mitte. However, eyes have long since turned back to the west in amazement, because City West has undergone a complete makeover. New addresses such as Bikini Berlin, the Upper West and the Zoofenster with the Waldorf Astoria have contributed to this. Other projects such as the Mall of Ku'damm, the Ku'damm Karre and the Quartier Neues Kranzler Eck have brought impressive change to City West.

The upper-middle-class flair of this district has evolved into a modern lifestyle that exudes great appeal, especially to new Berliners.

The good location of the property offers optimal transport connections to various destinations in the city. The main train station can be reached by public transport in less than 10 minutes. In the immediate vicinity there are sufficient shopping facilities, such as supermarkets, drugstores and pharmacies. A few minutes walk away you will find the subway stop Ernst-Reuter-Platz and Richard-Wagner-Platz.

Guerickestraße is just a short walk, along the Landwehr Canal and the Spree River, from Charlottenburg Palace, which is the largest palace complex in Berlin with its orangery, palace park and ancillary buildings. The Tiergarten, with the famous Zoological Garden, is also close to the property.

Cafes and restaurants can be found in the close vicinity of the apartment, as well as the sites of the Technical University, which can be reached on foot, making the location attractive for capital investors. Grocery stores, pharmacies, doctors and other stores for daily needs are located within a few minutes walk.

Your new home by the water – Modern flat by Lake Werlsee

New flat with balcony in the sought-after Samariter Kiez