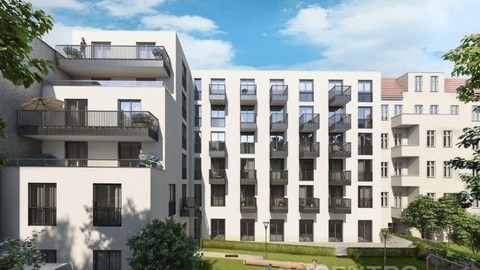 A new development of high-specification one bedroom and studio apartments in Neukölln has sold in a matter of days after Berlin international estate agency Black Label Properties brokered the project with a Hong Kong based investment company.

The previously ignored southeast district – now home to people from over 160 countries – draws expats, international students and young professionals from many global cities to add to its diverse culture. Despite being one  of Berlin’s most popular locations, Neukölln had the third-lowest number of permits for new apartment developments planned across the entire city in 2015.

Black Label Properties Director Achim Amann commented “This is the most successful project we have marketed with our Hong Kong client, who we are now in our second year of partnership with in Berlin. The demand for international buyers looking to secure their ‘part’ of Berlin – especially in areas such as Neukölln – is increasing, and we expect our total transaction volume in Asia only to exceed 50€ Million this year.”

The 2017 Price Waterhouse Coopers ‘Emerging Trends in European Property’ report ranked Berlin first for both investment and development prospects and expected increase in the amount invested in the city. With undersupply of new housing the main driving force behind growth in both capital values and rent levels, Neukölln saw Berlin’s second-highest rental growth in 2016 at 9.6% against Berlin’s average of 4.6%, and capital growth of 20.3% against Berlin’s average of 10.5%.

Mr. Amann continued, “We feel that it is not the price per square meter which counts to many investors, but more the potential of the rental market and the total purchase costs. Ideally, investors want studio apartments below 150,000€ or one-bed apartments below 250,000€ in vibrant Berlin neighborhoods such as Neukölln. Strong demand from people looking for accommodation is adding to the momentum, with high job growth and lower unemployment rates likely to put further upward pressure on prices in 2017.”

With Germany now the fourth-largest economy in the world and Berlin the second-largest city in the EU – and at the heart of the country’s long-standing tradition of innovation – the city has outperformed Germany’s GDP growth for years by 42% between 2005-2016. Thanks to low set-up costs and a business-friendly ecosystem, the city is thriving on the back of dynamic entrepreneurship, which is also fuelling population growth and housing demand. Just recently an arm of South Korean technology giant Samsung – Samsung Next Europe – announced it would be setting up its headquarters in Berlin rather than London “because the city (London) is not a fun place to live unless you are really rich”.

Germany is also now the world’s third most popular study destination after the US and the UK, bringing in students of all backgrounds and interests. Berlin offers free education and its universities and colleges attract more students than anywhere else in the country.

The tensions within the German housing market have been illustrated in a recent report on the housing and real estate sector by the Federal Cabinet, which identifies bottlenecks in the housing market “with rising rents and prices” particularly noticeable in the large cities and urban regions. Rents have risen by a total of 8.3 per cent in Germany between 2014 and 2016, according to the Federal Government. In 2013, the annual rate of increase was 3% and by 2016 it was almost 5%.

“Real estate is becoming more and more the focus of investment projects for cross-border capital movements,” the government report said, with sustained low-interest rates fuelling this development. While it is still unclear how the federal government intends to deal with the situation on the rental market in the short term, in the Berlin Senate the ruling coalition are already backing proposals to stop Federal owned land having to be sold to the highest bidder so that schemes for social housing and cultural developments have a chance to be built in high-demand area.

“Despite the current historically high returns, our advice to our international clients is to work on the basis of a 5.0% yield per year on their capital and 3.0% yield on rental income per year over the long-term,” added Mr. Amann. “Rents and purchase prices in Berlin are catching up with other major cities but we have a much more regulated rental market in Germany than the UK for instance. If we see housing supply increase over the next few years then these current levels will even out. We want to see Berlin remain a safe and secure place to invest so we can continue to bring high-quality projects to the market to meet demand while remaining affordable for people who want to make the city their home.”